Depending on your age and life experience, Trout Fishing in America may bring different things to mind. If you are a fisherman and fly enthusiast, it may remind you of the opening of trout season on one of America’s classic streams, such as the Delaware or the Madison.
If you are young, perhaps you will think of the homonymous band that sang children’s songs. My favorite, as a former school library media specialist, was Alien in My Nose, wherein the fate of the world is settled in a school library, saved by a kid killing time.
Then, again, if you happen to be a baby boomer, one of college age in the late nineteen sixties you may recall Richard Brautigan’s short novel.
The sixties were a time of ferment and turbulence. A counter culture arose that is familiar, and shared, at least to some small extent, by almost everyone who was young then.
By 1968 Brautigan’s book had gotten into the hands of Peace Corps volunteers. I read it, because everyone was reading it, or, perhaps, because there may have been nothing else to read at the time, but it did not captivate me. It was not long enough to fill up multiple grand taxi trips from Sefrou to work in Fes and back home. I preferred longer and more ambitious novels such as Bulgakov’s The Master and the Margarita or classics such as La chartreuse de Parme. Brautigan was mildly amusing, but shallow. Perhaps you had to be high to enjoy him. 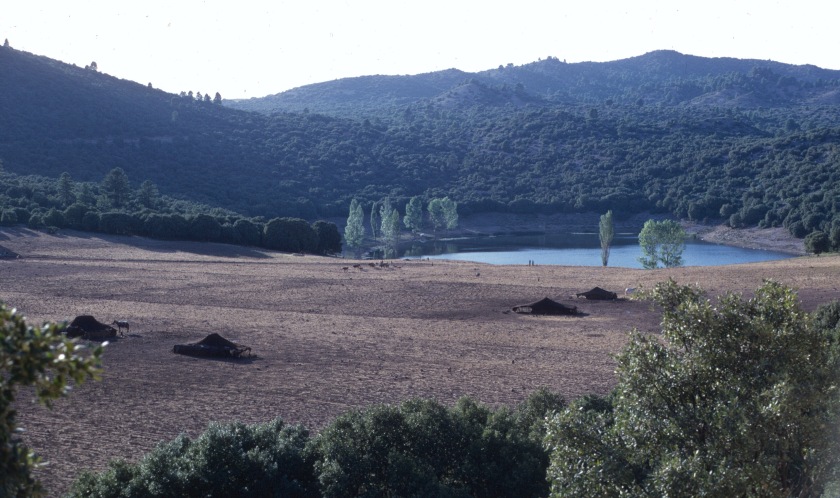 Trout fishing in Morocco was a different matter. At the time, I was interested in hiking and climbing, and fishing was secondary. I had some tackle, and fished a bit in the Middle Atlas lakes where European pike ruled, but the real trout fishing was in the central High Atlas. Al Jessup, the local Christian missionary, was by profession a fisher of souls, but Morocco was a difficult stream to poach. He was befriended by a French sports shop owner in Fes, and the two of them went on fishing trips together. He bragged of the ease of catching rainbow trout, of size and quantity in the cold mountain lakes and streams. I am not aware that he ever caught any souls. 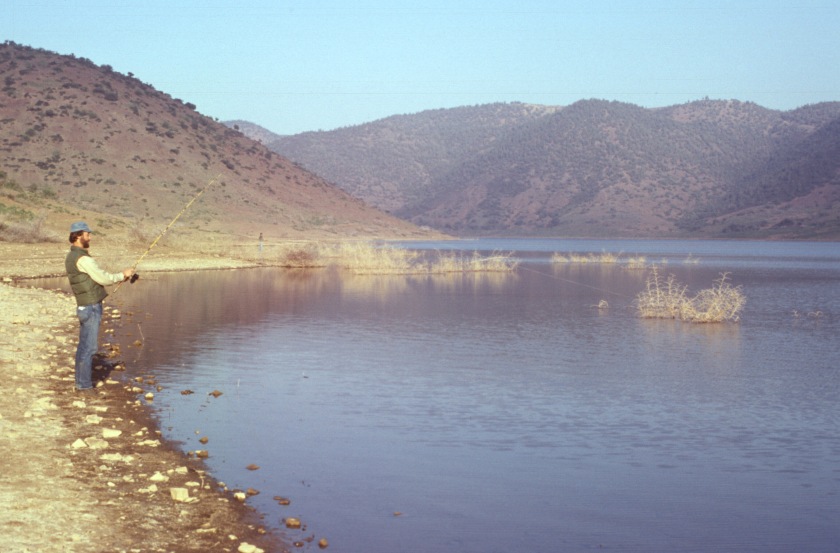 The rainbows were stocked, of course, as were largemouth bass, and other sport fishes. Morocco has its own native species of trout, one of which lives in Ifni Lake, in the shadow of Jbel Toubkal, a place frequently visited by hikers. All of Morocco’s trout are probably endangered today. If you are interested in Morocco’s native wildlife, you may enjoy this article on trout.
Before the Romans, Morocco probably had many of the large fauna of Africa: elephants, bears, lions. The North African elephant, was used in warfare by many armies besides those of the Carthaginians. Intensive use of North Africa for farming, and the insatiable demand for animal fights in the arenas of the Roman Empire eventually led to the extinction of most of the large fauna. Wild boar and macaque monkeys are the most serious threats you might encounter in a Moroccan forest today. I once asked a shepherd near Ifrane if he had seen any monkeys. After two years in Morocco, I had not seen one. His reply: “Are you kidding? The little sons of bitches are everywhere!” I finally did see the Barbary macaques, both in the Middle Atlas and in the Rif in the mountains overlooking Chauen. I never encountered a boar, except one my friend Jean-Michel shot and served roasted at the dinner table. Needless to say, Moroccans do not eat boar, but they do hunt them as the animals can be a nuisance. Around the turn of the twentieth century, pig sticking–hunting boar from horseback with pikes–was the dangerous pleasure of the more avid European hunters who lived in Tangier.
Thomas Pellow, an 11-year old English boy captured by Barbary pirates in 1715 and sold as a slave to Moulay Ismael, explains in his memoir, The Adventures of Thomas Pellow Mariner, what to do if one happens to cross a lion on the road:

The lion, on the other hand, shows himself boldly sitting on his breech with a very sour look in the road, about twenty or thirty paces before travellers. In this case, instead of walking on and keeping their eyes off him, they must stand still and stare him full in the face, hollowing at him and abusing him all they can ; and for fear he may not understand English, in the language — if they can — of the country. Upon this hollowing and staring at him, he gets him on his legs, and, severely lashing his loins with his tail, walks from them, roaring after a terrible manner, and sits himself down again in the road, about the distance of a mile or two, when both traveller and lion behave again in the same manner ; and after proving them thus a third time, the lion generally leaves them without interruption.

There is no danger of that today. Traditionally, it is said that the last wild Barbary lion was killed in 1920. Some put the date in the nineteen forties. Sadly, today the Barbary lions are gone except for a few in zoos and manageries such as kept by the kings.

Those caged lions had their uses. El Rogui Bou Hmara led an unsuccessful revolt against the sultan Moulay Abd el-Hafids from 1902 to 1909. When his tribal support disintegrated, El Rogui took refuge in a mosque thinking he had sanctuary. It was bombarded by the sultan’s French supplied artillery, however, and he was captured. Displayed in a cage in Fes, he was tortured and eventually thrown to lions, though it isn’t clear whether they were interested enough to actually eat him!

Extinction is a thought much on my mind these days. I’ve been following Elizabeth Kolbert’s articles in The New Yorker for years, and finally read her book, The Sixth Extinction, this spring.
This post was prompted by an article I read the other day in La Dépêche. I’ve been thinking of a hiking or climbing holiday in the Pyrenees, so I follow what goes on in the region by reading this newspaper published in Toulouse. If you have been following the news, then you know that the Catalans and Spain have many issues that are coming to a head. The Catalans have my sympathy: they suffered years of cultural suppression by Franco’s dictatorship. Yet I find rabid nationalism dangerous, too. The future of mankind, if it is to be happy, will surely entail greater economic and political integration, as well as cooperation and common sacrifice. May the coolest heads prevail and everyone receive what is most important to him.
I noticed an article on the discovery of mercury in some of the high lakes of the Pyrenees. Investigators have come to the conclusion that the mercury arrived in the form of trout fingerlings, that are raised in hatcheries and stocked in the lakes. The trout are fed meal derived from ocean fish that have bioaccumulated mercury. Here is a case where humans unknowingly are transferring toxins between species and environments.
If you’ve read The Sun Also Rises, you know that Hemingway’s idea of heaven was trout fishing in the Pyrenees. He thought Spain had the best fishing in Europe.
O brave new world!